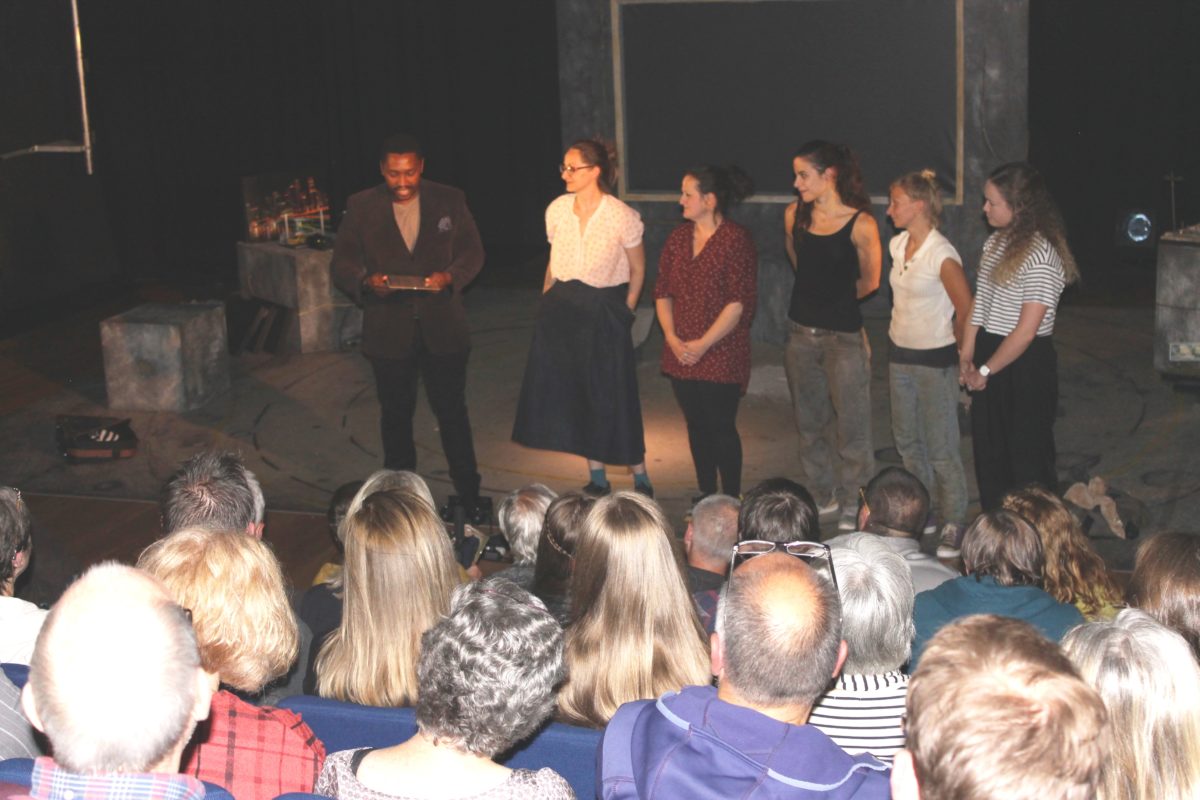 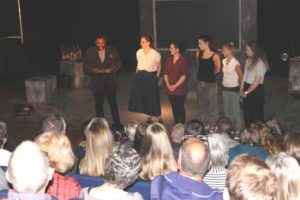 On September 22nd at Deda Arts Centre, Derby, Joseph Chivayo, chair of the Derby City of Sanctuary network presented the Maison Foo Theatre Company with a sanctuary award following their brilliant production of “A Thing Mislaid”. In making the award Joseph congratulated Maison Foo on a stunning performance and for learning, embedding and sharing sanctuary values of welcome and inclusion in their work over the past few years. 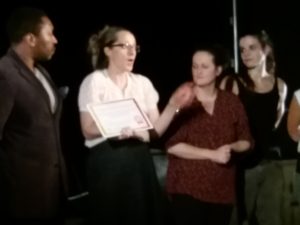 Sanctuary award presented to Maison Foo by Joseph Chivayo, chair of Derby CoS

Janet Fuller from the Derby Refugee Advice Centre (DRAC), some of whose volunteers helped advise and translate “A Thing Mislaid – writes of the production:
“I’d like to thank everyone at Maison Foo for such a stunning performance on Saturday. It was wonderfully uplifting as well as achingly sad and in a sense that combination is the way forward in highlighting the lives of asylum seekers and the bureaucratic processes they have to go through which are often so hostile, incompetent and unpredictable. Thank you for ensuring the script is so authentic and really reflects the experiences of those whose lives are torn apart. I laughed and I cried and I did, at the end, have hope for the future because we can welcome with a smile and many do. More may do in the future because of theatre like yours”

The Derby Telegraph Monday September 24th also carried reviews of A Thing Mislaid: “beautiful, sad, poignant, remarkable, at the same time funny, a brilliant piece… this is extraordinary and endearing theatre …
The distressing words from a refugee at a Derby support centre led to two home-grown writers and theatre directors to pen a new piece which premieres at Derby Deda. Bethany Sheldon from Holbrook and Kathryn Lowe from Mickleover run the Maison Foo theatre company. Their latest work A Thing Mislaid celebrates and questions the idea of what it means to leave your birthplace in search of a new place to call home. It uses Foo’s trademark style of humour, clowning and physical theatre mixed with experiments in miniature puppetry and live camera to create cinematic moments live on stage. The company has set up a Refugee Friend scheme after admitting the pronouncement from the man in his 50s from Africa “broke our hearts into a million pieces.” Bethany says: “We were visiting Derby Refugee Advice Centre last year. We wanted to identify ways in which we could support refugees and those seeking asylum. The centre does tremendous work and we have really got to know the wonderful people there. We were chatting to a refugee, a gentleman in his 50s, and at the end he thanked us and said that in the two years he had been living in Derby, we were the first people he had spoken to outside the centre – the first people he had had a proper conversation with.”
https://www.derbytelegraph.co.uk/whats-on/whats-on-news/play-inspired-derby-refugees-has-2032745

“A Thing Mislaid” is touring the Midlands this year – Birmingham, Lincoln, Wolverhampton, Burton on Trent, Nottingham and Leicester – do go and see it if you have the chance – details on Maison Foo’s website: www.maisonfoo.co.uk

During the past few years Maison Foo have involved sanctuary seekers in helping their Theatre Company to learn, embed and share City of Sanctuary principles including

‘Theatre has the power to transform. Maison Foo are transforming lives and perceptions through their impressive commitment in ensuring that people seeking sanctuary are not just talked about in their plays but are at the very heart of everything they do. Hopefully this award can inspire others in the arts sector to also become places of sanctuary and opportunity for some of the most marginalised people in our society.’

“proud to welcome and support those seeking sanctuary in Derby/s”